by Sarah Curtis and Martyn Green

Today the CRED team returned to the juvenile detention centre to spend some time in the classrooms and workshops with the young people. Firstly we met the prison director Vincent and handed over the donations that the team had collected. The donations included; two full football kits, laptops, cricket set, badminton set, clothes, and many other resources for the teachers. Vincent and his staff were very grateful for the donations and promised to put them to good use. We were all given a security briefing by Vincent who advised, “if anything goes wrong (whilst inside) stand still”. We nervously laughed but were still determined to continue.

We walked underneath the watchtowers, through the steel gates and inside the high prison walls. There we split in to three groups. Each group joined a class to see how academic and vocational skills are taught. We took turns to rotate around the classrooms whilst the students followed their timetabled lessons. The majority of teaching is done by adult prisoners who have been recruited for their specialist skills from other prisons around Rwanda. In return for their teaching they receive a small wage that they can send home to their families.

We joined woodwork, tailoring and technical drawing skills classes and saw how the young people are given the opportunity to learn skills that will enable them to find a job once they are released. Clearly they lack some basic resources but through improvisation and much making-do the lessons remain structured and taught by skilled teachers.

We also joined classroom based English, science, maths and physics lessons. The academic teaching was all done in English with some additional explanation in Kinyarwanda. In some classes the CRED groups led lessons or had Q&A sessions with the pupils. Bizarrely we even fielded a question on Brexit, sadly just like Theresa May we had no idea what the future holds!

We were all made to feel very welcome by both the staff and the young people and despite being in a prison with over 400 inmates nobody felt uncomfortable or intimidated. We were inspired by the young people’s enthusiasm and infectious smiles. One student asked if we “felt scared to be in the detention centre because (we) were in a house of sinners”. Without a second thought we were able to say no. Without knowing the reasons why their lives had ended up there it was difficult to see them as anything but schoolchildren albeit in orange and pink prison garb.

Before we left we had the opportunity to visit the Atelier de Couture outside the walls where some of the students are sent to finely hone their tailoring skills before their release. Ryan and Sarah took the opportunity here to buy some very fetching student made rucksacks.

As we left it was with an optimistic feeling that despite seeing so many young people having made some wrong turns in life that they were being given the skills to help them eventually start a life of honest employment. 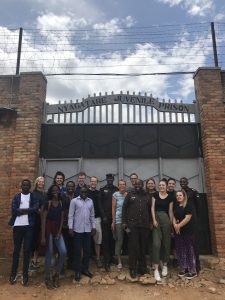