CRED Team Rwanda – at the Catch Up School

Today was an early start as it was our first day at the catch up school. We started the day with some last minute preparations for our lessons, filled up our cases with all our equipment and got onto our mini bus. Filled with excitement, the bus was alive with talk of how we hoped our lessons would go and what the children would be like.

The school was only a short drive away and Paul our driver did a fantastic job of navigating the chaotic roads which were more pot hole than they were road! As we pulled into the school some team members who had previously visited noticed the massive transformation that had occurred over the past few years. From Katie’s trip in 2014 to now, the school had been extended to accommodate more students in two additional classrooms, the toilets have had an upgraded along with the kitchen area. Notably there are additional rooms for the young girls to use when menstruating, this allows them to attend normal classes and not miss out during this time, unfortunately this isn’t the case in many schools out here.
We couldn’t forget to mention the gigantic water tanks towering over the school and would like to say thank you again to the wonderful people who fundraised for these to be built. I’m sure the founder of the catch up school Theoneste would agree they are a massive help now he doesn’t have to collect water in his car everyday!

When we pulled up to the school we were met with lots of eager, smiling faces peaking around windows and doors excited for our arrival. You could hear the murmurs of ‘muzungu’ alongside other excited whispers. We then learnt that there are now 210 children at the school. 148 of these are fee payers (this means in some cases they are sponsored through compassion to go to school), 21 street children and the remaining are vulnerable or orphaned children.

Our first port of call was to begin our lessons in the nursery classes. Helen led this lesson based on the parable of the lost coin. This incorporated story time, counting and crafts. Sarah G did an amazing job assisting Helen with story telling. Beth and Katie got hands on during the craft and created fabulous headbands. The children enjoyed practising their counting skills in English with the gold coins Helen had provided.

At 10am the children had their first break of the day. Knowing that we were waiting outside, when the bell rung streams of children flooded out their classroom doors for games, singing and cuddles. George very successfully learnt a Rwandan song and dance which involved a lot of hip shaking!

We then commenced our lessons with the older classes, lots of planning, organising, cutting, laminating and hard work went into this before and during the trip. It was fantastic to see the preparation paying off when the children were enjoying our lessons. This was a brilliant opportunity for them to practise their English, which was proficient even for some of the younger children.

Simon lead a fab lesson on flags and continents with the help of Sarah G and Katie. What was also amusing was Katie trying to help the children name the flags and the continents (there was a lot of checking with Simon to ensure she was saying the right thing – she normally wasn’t!)

As Paige, Ryan and George arrived in P3, eyes eagerly found our suitcases full of equipment as we were greeted with warm smiles and ‘hello visitors’ spoken by 23 children. As the children introduced themselves we unpacked and started with basic English lessons. Ryan led exciting lesson and tried to develop their English further with question and answering, ending with a role play of the conversations. We then moved outside and begun an exhausting game of bench ball. Spilt into teams we competed against each other to get the ball to the opposite end of the field. They were definitely quicker at running in the African heat than we were!

Whilst the lessons were in full swing Martin used his expertise to fix many desks and the guttering. He came away with a few cuts and bruises, African health and safety is nonexistent! The head master has already invited him back next year, clearly impressed with his handiwork.

As the day came to an end we left to questions of ‘when are you coming back?’ and plenty of smiles and waves.

We look forward to giving you an update tomorrow – but first, ice cream! 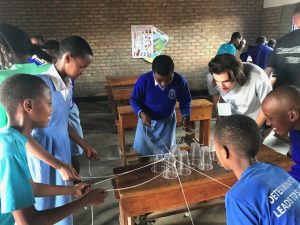 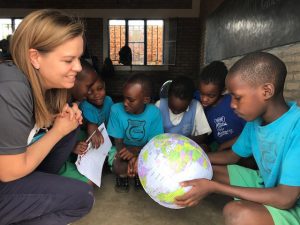 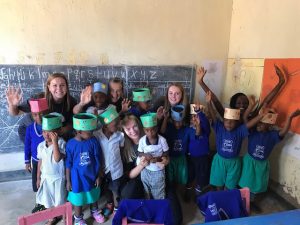 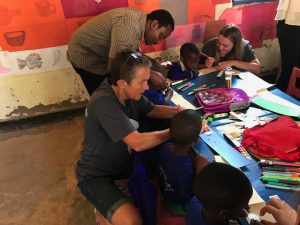 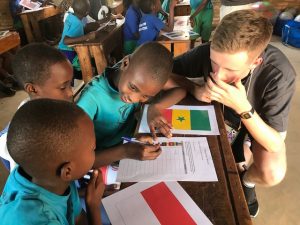 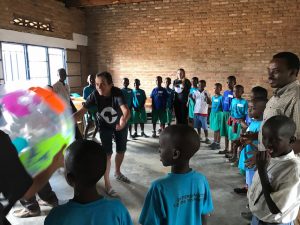 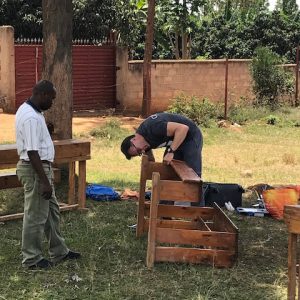 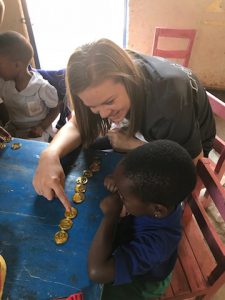 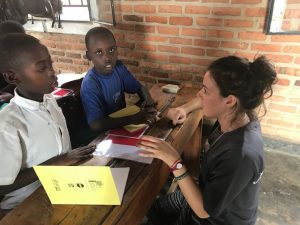 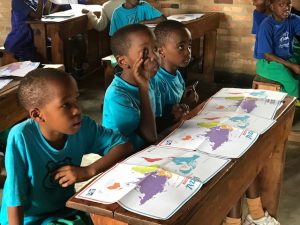 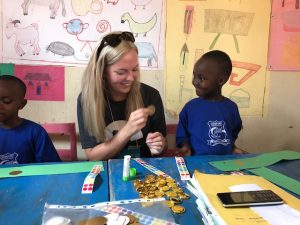