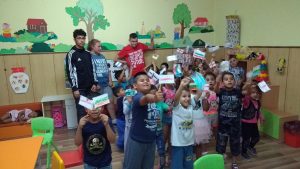 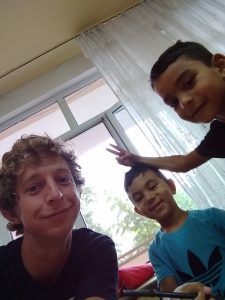 Today, we have experienced the headache of trying to look after children. I can honestly say I don’t think that my brain is going to recover for quite a while, although most of the children were well behaved (There were some loud ones but never mind). Both classes were an absolute pleasure to have the chance to experience what it would be like to work in a nursery. The games were in depth, touching on an enjoyable level with the children, but so much so that they got experience from within the games and activities which were provided. I found it a touch hard to tell the children that I didn’t understand Bulgarian, so for me they could have been saying ANYTHING! I did find them funny though when they made flags, they were so proud, that made a warm glow in my heart. The children’s reactions were amazing, they cheered so loud, I believe I could’ve gone deaf. They chanted for the kids to win, it was almost like a mini family all in one room. I believe that the children did like drawing faces onto the balloons (although after a while, were used as a weapon. The horror on my face when you see a tonne of kids running around hitting each other with balloons. It hurts just thinking about it).

We had the pleasant experience of delving into cultures which I personally believe were a touch on the weird side, but each to their own opinions, I believe that it wouldn’t be for me to have my own partner chosen for me then forced into marriage! Some parts of the Roma Tradition sell wives, which to me sounds a touch dangerous, I’m really glad of the opportunities that we are provided with. The Team has really had an insight into all of the traditional ways of the Roma Community!! The Roma were extremely approachable and I believed that all of the Roma Community (Young and small) Showed that language barriers weren’t an option for them, and they powered through it with so much pride. It also showed sign language is a universal way of talking, as it is rather hard trying to talk to people who come from a completely new country. It’s good of them that they did not feel threatened by us, as I would find it a touch odd strangers coming from another land entering my community with no idea that they were coming. We really learned a lot and it helped us think about the freedom that we have in the UK.

The rain that came in the afternoon was so strong and lasted so long that we had to cancel our afternoon plans which was a shame but it did make at least one of our group so happy!! 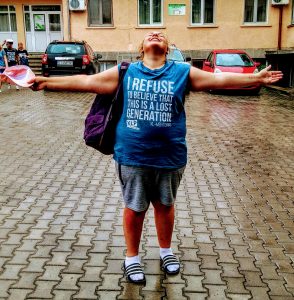 Somebody loves the rain!

Hard to believe that in 3 days we shall all be leaving the hotel for the final time. These are memories we will remember for the rest of our lives.