I’m in Uganda with a group of friends, visiting some projects that relate to CRED partners, and doing various bits of partner support work as we go round.

Today we journeyed from Kampala eastwards, to an area about 8 miles from the Kenyan border, where small-scale artisanal gold mining takes place, and where CRED has been involved in helping install and train up the miners in how to use some technology that, when the full suite of components is in place, will enable the miners to eliminate the use of mercury from the gold mining process.

A bit of background: until now, mercury has been used as a key element in the processing of the gold, as it helps to amalgamate the tiny pieces of the precious metal into a larger, sellable, nugget. However the toxicity of the mercury, and the use of local water sources as part of the panning and washing process, is not a good mix, and there has been increasing concern about the amount of mercury that is being washed into local streams, rivers, and farming land, which in turn leads to risk of injestion of the element by those living downstream as they collect water, grow their crops, do their washing etc. 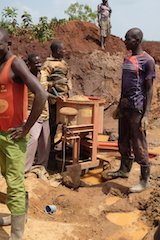 And of course it is also a health hazard to those miners who have to handle the toxic substance, especially when they are pregnant.

So, it is no surprise that the thought of being able to process gold in a mercury-free way is so appealing, and today we found out more about the technology enabling this to happen, and also met with some of the miners who are now using it.

The equipment that they use is a Gold Kacha, two Mastas, and in the next few weeks will come the final bits of equipment: a Konka and a Smelter. The Kacha, which looks a toploader washing machine with a ribbed inside, catches the gold working on the principle of centrifugal force. The Masta, a fine mat that sits under the Kacha, catches any gold that escapes the Kacha. The Konka, a Z-shaped set of filtering mats, catches any gold that escapes the Masta. And the Smelter joins all the bits of gold together. 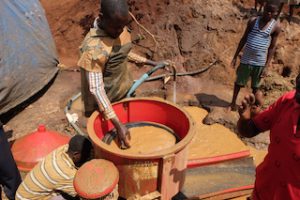 According to the miners, they are now getting 95% of the gold from the mined ore, compared to approx. 35% recovery beforehand – so a massive increase in how much gold they can take to market. And because it takes a day to process with the Kacha etc what before would have taken a week to pan, the miners can get even more increased outcome for their efforts. Brilliant! Or as one miner called it – a Wonder Machine!!

Simon is one of the miners we met today and is the third generation of independent miners in his family; before that there was mining but it was linked to working for a colonial master. He and his wife Betty have seven children ages 6 yrs through to 20 yrs, all of whom go to, or have gone to school.

Simon and Betty are both miners, and they are part of the Sinyanyonji Artisan Miners Alliance (SAMA), which is a cooperative of miners who work together and who house the Kacha etc. There are other cooperatives who use the Kacha, but they travel across to use it, as it doesn’t make economic sense to have lots of Kachas which would act as a disincentive to joint working and economy of scale.

Simon was delighted to tell me how SAMA (of which he is the chairperson) have recently gained Fairtrade certification, and so are now the proud producers of Fairtrade certified Gold. This has required implementation of various policies (child labour, gender equality etc), setting up a management structure within the cooperative and improved record-keeping amongst other things, and the miners are looking forward to the day when they can sell some of their gold on the fairtrade market. 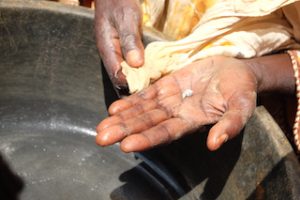 Unfortunately, SAMA haven’t been able to do this yet, due to the quantity of gold that the fairtrade buyer would want as minimum, and the issue of cash-flow for the miners until that quantity has been reached. But plans are afoot to try and achieve this, and I pray that it will be able to happen soon.

Simon was telling me that when the miners sell the gold on the open market, to middle-men who come to the area, they get 100,000 UGX per gram. If they were to go to Kampala to sell it, still just to regular buyers, not FT buyers, they would get 135,000UGX per gram, but that involves long bus rides (6-7hours), missing at least a day’s work, and all the associated costs; so not really worth the time and effort.

It was great to be able to go and see the miners today, to hear their enthusiasm for the Kacha etc, and to listen as they talked about their dreams for the future. But it was also frustrating to think that despite having got so far with regard to the fairtrade side of things, they still aren’t able to really reap the benefits. Oh that things will change soon for them. 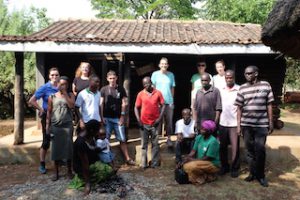