CRED Foundation never ceases to be inspired by the people and projects of its international partners. One of those partners is the wonderful Kenyan organisation of Spurgeons Academy.

Nestled in the Kibera slum of Nairobi, Spurgeons Academy is an incredible school providing high-quality, subsidised education and holistic support for some of the most vulnerable children in the area. For many of its pupils, the academy provides a safe and secure oasis from the many struggles of home life.

Kibera is the largest slum in East Africa, home to over 1.5 million people in just 1 square mile of appalling poverty. Many children in the area either have to care for family members with HIV/ AIDS or have been orphaned, leaving them to shoulder much responsibility from a young age.

Spurgeons Academy doesn’t just support pupils academically, but emotionally, socially and vocationally too.  The local community has complex and diverse needs and Spurgeons seeks to bring assistance to each pupil through as many avenues as possible in order that the community as a whole may begin to see positive change. 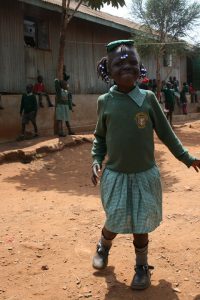 All who have visited Spurgeons on team trips will know that one edge of the school is boundaried by a railway line that runs from Mombasa, though Nairobi and on beyond. Until fairly recently it was an infrequently used line that trains ran along at a relatively slow rate. When there were no trains on it, people would use the line to walk along, and subsequently other people would use the line as a location to sit and sell all sorts of small goods (that could be gathered up quickly when the next train came along).

But all that is changing. The Kenyan government has decided to upgrade the railway line, and replace it with a wider gauge line that enables faster trains to pass along it. Train stations are being built along the line, so that residents of Kibera will be able to use the trains as a means of transport to get into the centre of the city, and out to other parts of the country.

All sounds good? Yes, it is, in some ways. But for the students and staff of Spurgeons Academy it is proving to be a big problem as the expansion of the railway means that the school has had to lose a swathe of its land, as well one of its main entry points for the students who live on the southern side of the school. The land it lost happened to be the part that had the latrine block on it, plus some classrooms, so the school lost not just land, but also some crucial buildings – all without compensation as they are not land-owners.

Spurgeons are challenging the lack of compensation, but it is taking a long time, and in the meanwhile the staff are doing all they can to help the students continue to receive the best education they are able to give them.

One other challenge that Spurgeons, and many other Kenyans are facing at the moment is to with the climate and the change in weather patterns leading to unreliable rains.

Kenyanito Dudi, the MD of Spurgeons and our ‘main man’ at the school writes: ‘Presently, we are having some financial challenges and this has been necessitated by a number of factors for instance, heavy rainfall that has ruined food crops in the farms from the countryside and rendered consumers with little choices in the urban areas. Prior to this there was a prolonged drought, so harvests have been very bad’.

The school aims to give every child a morning drink of Kenyan-style porridge, and a lunchtime bowl of githeri which is a local dish of maize and beans. With harvests failing and food prices soaring, the school is struggling to keep the feeding programme going, and is trusting in the generosity of supporters to assist.

Despite all of this however, the children of Spurgeons continue to benefit from the holistic and high-quality care, education and support that the school provides for them, and Spurgeons Academy continues to be a beacon of safety, light and hope in the midst of some very tough conditions. 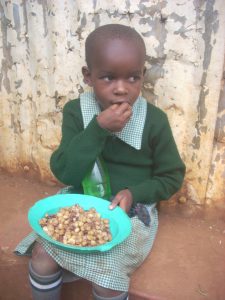 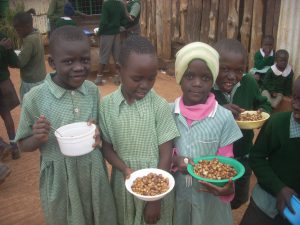